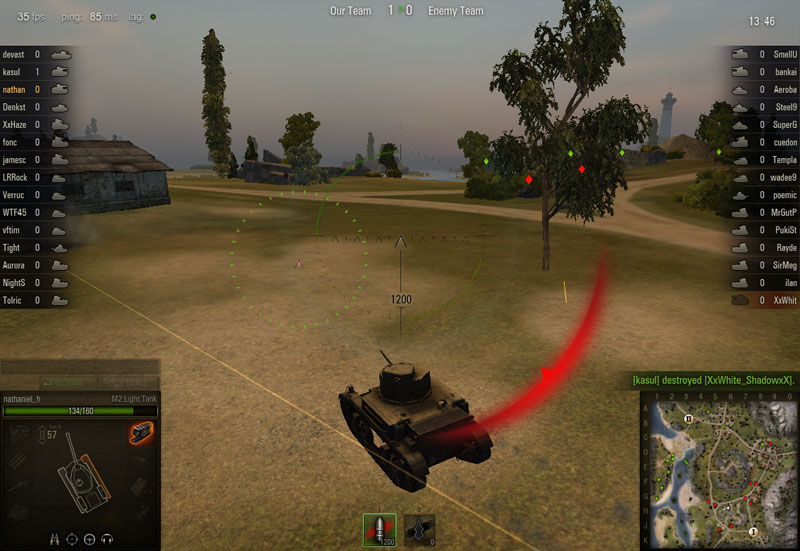 World of Tanks is a fun little game that a friend of mine showed me. It’s controls are very easy to get used to, and it’s easy to start playing right away. You only have to sign up and download the application from their website, like most games.

With World of Tanks, there are five classes of tanks. Tank Destroyer, Artillery, Heavy, Medium, and Light, which are signified by different shapes on the playing field. Triangle, square, three forward slashes, two forward slashes, and diamond. My two favorite types of tanks are probably the Tank Destroyer and Artillery. There are 3 countries with their respective tanks to choose from. USSR, Germany, and USA. So far I’ve tried out many of the German tanks, which can be a little weak on the firepower, but eventually you get used to it and they’re pretty decent tanks. My Russian tank is one of my most dependable tanks. It’s not too slow, has pretty good firepower, and always gets me a fair chunk of change per battle. It always hurts bad when you get hit by someone and you lose your engine or your tracks. You can’t move, and you’re a sitting duck just waiting to be destroyed. Usually you want to face towards the person you’re shooting at, as your front armour is strongest. The M2 light tank is another one of my favourites. With a speed limit of 58 km/h, you can speed so fast people can barely even hit you. 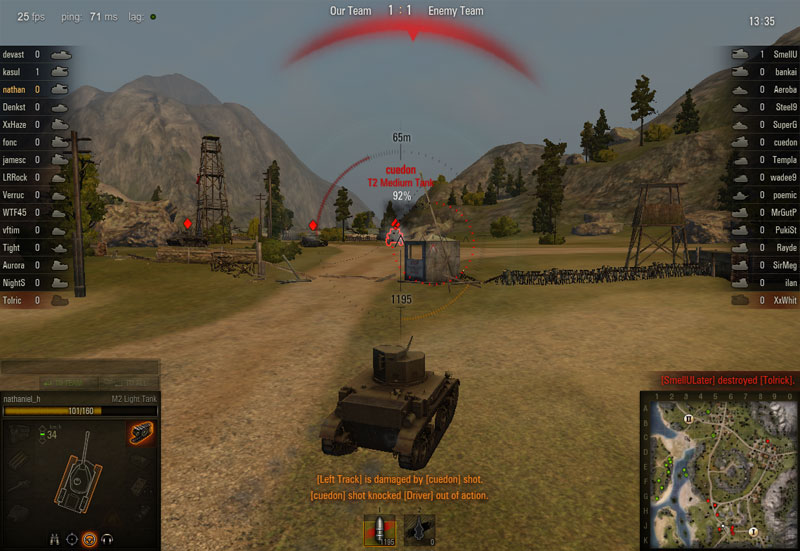 There are quite a few different maps in this game, but if you stay in the same tier of tanks you’ll see a lot of the same maps over and over again. There doesn’t seem to be an option of choosing which map you want to play on, which is disappointing.

If you think you can just go in with your almighty heavy tank and blow the entire team off the face of the earth, you’ll surely be flattened to the ground. There are a lot of tactics involved. You need to slowly advance closer to their base until they have only a few weaker tanks left. Then your team can easily go in for the capture. Which, is only one of the ways of winning. You could also choose to decimate all 15 of the tanks on the opponent team. There is a time limit 15 minutes to each game, but usually most battles end long before it’s up. 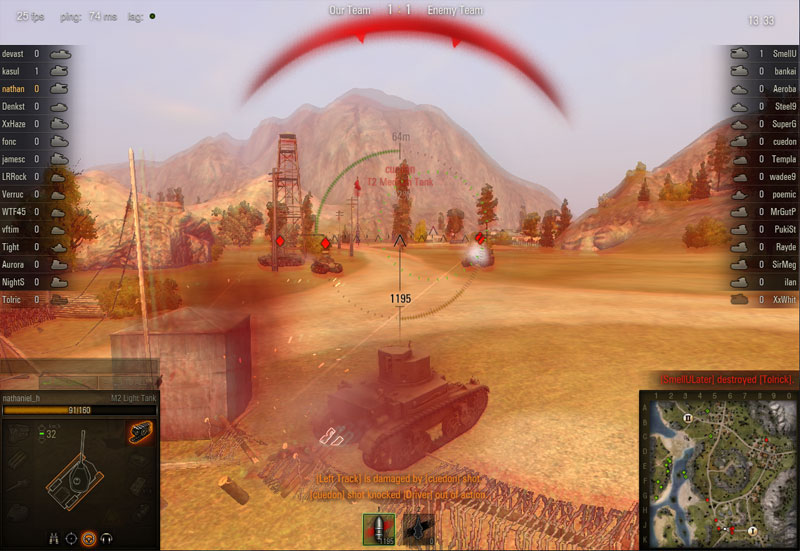 The only problem is, sometimes people don’t actually act like a team. They’ll go do their own thing instead of working together to win the game. It’s especially obvious when you’re an artillery and no one protects you. If someone from the other team spots you and you’re an arty (what people call artillery just because they can’t type), you’re dead. You can’t rotate the tank fast enough to shoot at them, and the reload time on the gun is too slow if you miss. You only have one chance to survive in most situations, and that’s if you hit them spot on, which is a rarity. Basically, I’m just telling you to protect the artillery, they help you more than you know. While playing the game I’ve found that experience points (xp) are best earned by capturing their base, but you can earn xp by damaging other tanks and scouting. It’s based a lot on what you’re team is doing and if you’re in a higher or lower tier battle. If you spot a tank and your team kills it, you’ll get more xp for just spotting the tank even if you’ve done no damage to it. You could even just sit around an entire battle and you’ll still get xp if your team wins, but it won’t be much (and they’ll be mad at you). One thing to note is you can damage other tanks by ramming into them, which is especially effective if you’re fighting against the thin armour of a Tank Destroyer or an Artillery. If your tank gets destroyed, you won’t be able to start another battle with that tank until the battle has finished, even if you quit and restart the game. Personally, I think the game is quite fun, but like most games, you have to spend a little bit too much time just trying to get xp or exchange gold, and of course they’d love to sell you premium features if you pay real money. If you don’t have some of the premium features, you can’t transfer xp you earned from one tank to another, so if you have any xp left over it’s just a waste. Also, if you only have the free version, you miss out on quite a few tanks, and you can’t easily skip tanks you don’t want to purchase. You have to buy each tank one at a time and upgrade them by battling. It can take quite a long time that way. 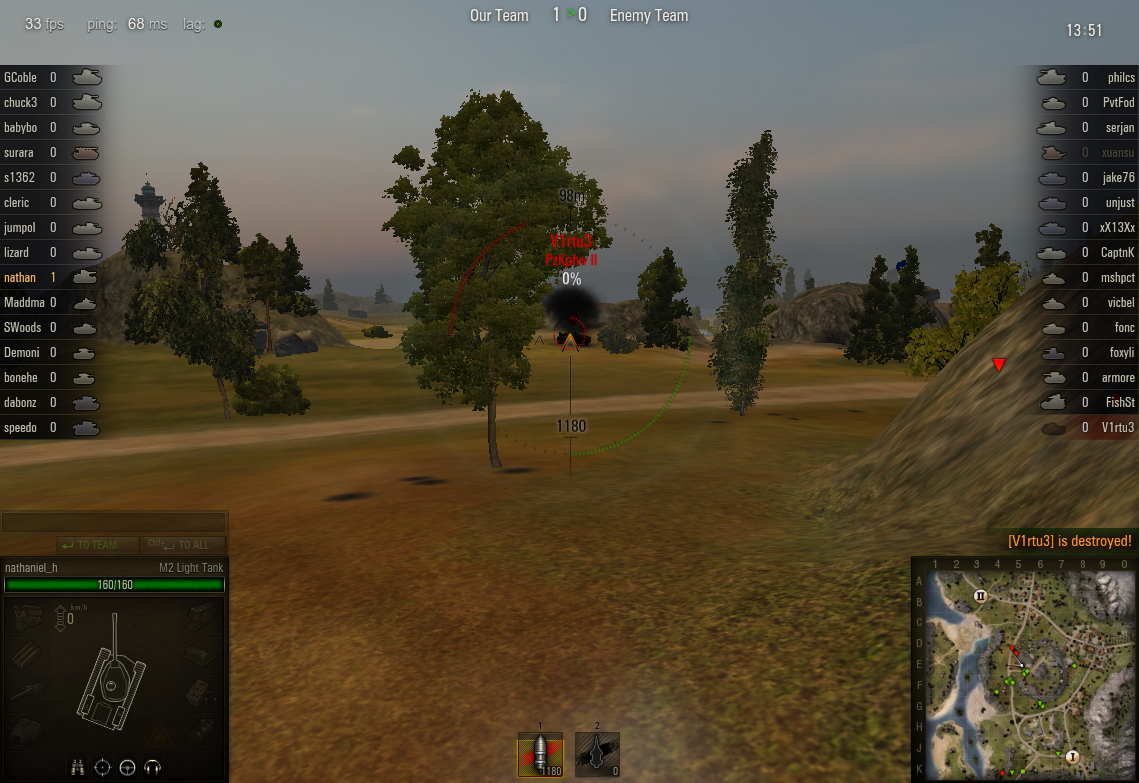 Thanks for reading my review! My World of Tanks username is nathaniel_h if you’d like to meet up in a platoon.

I started Rhinofeed in 2011 as a way to share my various hobbies with the internet. I hope you enjoy reading my articles and watching my videos as much as I have enjoyed sharing them!
YouTube | @Rhinofeed | Follow me on Facebook